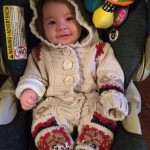 YS is 15 weeks now. Thursday was his first full day of daycare (I had afternoon errands to run) and Friday was my first full day back at work. It’s both harder and easier going back this time.  He seems to be doing well at daycare. He’s taking 2-2.5 oz per feeding with almost no…
END_OF_DOCUMENT_TOKEN_TO_BE_REPLACED

Darius and I took Young Sir to his six week checkup with the midwives on Wednesday. We saw Joanne, which was nice because she was my attending midwife at his birth. First we chatted a bit and she asked me all sorts of questions about YS and sleeping and breastfeeding. I’m such a second time…
END_OF_DOCUMENT_TOKEN_TO_BE_REPLACED

On Friday, Young Sir started not wanting me to put him down at all and was getting very upset at diaper changes. Sometime that day, in the late afternoon or evening, I noticed little white dots all over the outside of his butt, down his butt crack, and on the bottom of his testicles. Then he started screaming when I changed his diaper. He’d had mild-to-moderate diaper rash before, but nothing like this.

By Saturday morning I was freaking out about it and dreading diaper changes. My over-extensive Googling said it was either a very bad rash, yeast, or an allergy reaction. Since I wasn’t sure what to do, I put in a call to the midwives at the Birthing Center. Joanne (the one who was there at YS’s birth) called me back and she said it didn’t sound like yeast. She recommended using just warm water and cornstarch, keeping him cloth diapers, making sure to do frequent changes, and see if it got better.

So that’s what we started to do. We have a little bowl upstairs for warm water and I found some small cloths that could be used as wipes. For going out I have a small container of cornstarch in the diaper bag and we have the wet bag for the used wipes. It does mean that diaper changes take a bit longer, we have to think about the set up, and we’re going through diapers much faster, but it’s worth it.

By midday Sunday, most of the little white bumps were going away. On Monday, YS actually slept through a diaper change (a huge change from him screaming at every one and being very uspet for a few minutes afterwards). By yesterday his butt started looking much better, it was even pink and not bright red in places. Today Bubbe (she’s been in town since Saturday afternoon), spent some time with YS on the floor giving him bare butt time (on towels and waterproof pads) while I showered (hurray!) and pumped. His butt has been looking even better since then.

So, probably not yeast or it wouldn’t have cleared up as quickly. But I’m still worried that we don’t know what caused it. And if we don’t know what caused it, we can’t prevent it happening in the future. Part of me still thinks it might be an allergy as I had something with peanuts on Thursday night (I never eat peanuts, I HATE them). Or maybe it was because I didn’t change him soon enough overnight Thursday night. Or maybe it just happened because he’s sensitive to something. Who knows. I just hope we can get to a point where we can use wipes and cream or powder without him having a bad reaction, especially because I think daycare will freak out if we tell them we can only use cloth wipes (the won’t even do cloth diapers). Well, we’ll see what the midwife says when we go to our appointment this afternoon. 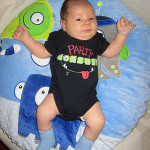 Young Sir turned one month old on Tuesday! How does time pass that quickly? We weighed him on Monday night and he was 9lbs 10.5 oz! No wonder he sized out of newborn clothing and diapers the week before. He’s getting sooo big. YS is still a very efficient nurser and still pauses to burp…
END_OF_DOCUMENT_TOKEN_TO_BE_REPLACED 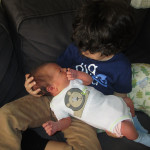 Young Sir, as I’ve started calling him (to go with Little Prince), is now about almost two weeks old. I probably can’t remember everything that has happened since his surprising (to me) early arrival so here are so highlights as I can think of them. First, this recovery for me has been a million times…
END_OF_DOCUMENT_TOKEN_TO_BE_REPLACED