On Saturday I hit 28 weeks. That means that no matter how you slice it, I am officially into the third trimester. I can’t believe the time has gone so fast. I feel like we haven’t really done anything to prepare yet. Well, we did get Bae’s coming home outfit.

Here I am at 28 weeks in my walrus costume for an Alice in Wonderland party. I feel like the pearls really add a nice touch. 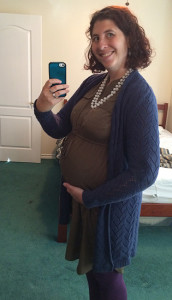 I had my glucose test on Friday. It was the two hour one, so if I fail any of the measurements, it means I’ve failed the test. I find out the results this afternoon (probably). EEP! I brought a straw, so that helped the drink go down easier. And during the test I felt fine. I remember feeling really dizzy and tired and out of it when I took the three-hour one last time, so hopefully things will be good this time. Update: I passed, but my iron is low, so we’ll have to work on that.

Midwife said that everything feels and sounds good. Bae even feels like he’s already head down, which is exciting. I was already pretty sure he was head down as I’m pretty sure I’ve been feeling hiccups down low recently.

Physically I feel like I’m just a litany of complaints these days. I had a cough for the past three weeks that is only finally feeling like it’s really going away. It was so bad that I actually went to the doctor and had a five day run of antibiotics. I’m taking allergy meds every morning and last week I took robitussin for a few days so I wasn’t hacking up a lung while observing a class. My pelvis still hurts a lot and I’m getting sciatic pain on my right side. And all the coughing has caused a strain on my right side around the middle of my ribs. I’ve been wearing a support belt and going to the chiropractor, but there’s only so much that can be done. ~sigh~

But Bae is certainly growing and kicking up a storm. My friend gave me a huge stash of cloth diapers, so that’s super exciting. And I’m working with friends to plan our retro video game sprinkle for him in a few weeks. I’m trying to balance my usual “invite everyone to celebrate” with “let’s keep this small as it is a sprinkle, not a full shower.” Hopefully no matter what happens with it, it will be lots of fun.