Young Sir turned four months of February 10. Being that I am now working full-time outside the home and that he’s a second baby, I haven’t had a chance to record anything about him in a while. 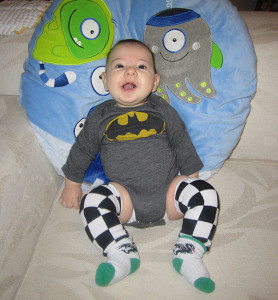 At his four month check-up he was 14lbs 15oz and 25″ tall. That’s one pound heavier and one inch taller than LP was at the same age. His percentiles are in the 50somethings, except for his head which is about 14%. The pediatrician pronounced him as looking good. 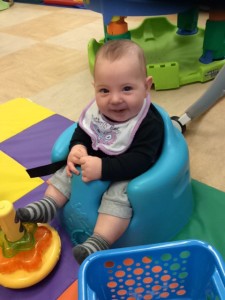 At that point I hadn’t seen him roll over yet, but the people at daycare claimed they had seen him flip back-to-front. I could tell that he really wanted to flip, but couldn’t always get it. Now he can flip back-to-front easily and likes to do so often. He’s a big changing table wiggler now. He isn’t flipping front-to-back yet, but when he’s on his tummy he loves to look around and can sometimes spin a bit in a circle. So I’m not sure if he can’t flip, or if he’s just not interested in trying. 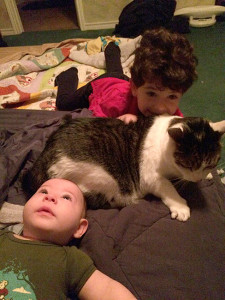 YS is interested in just about everything we do, especially everything that LP does. He looks and watches for him all the time. 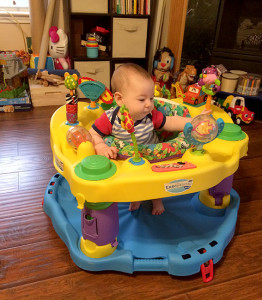 He also loves to sit up and stand assisted. We cleaned up LP’s old exersauser last weekend and YS just loves hanging out in it. He really likes the ones that spin around. 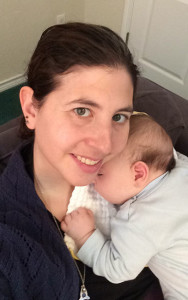 YS hit the four month sleep regression by not napping much at daycare last week. I think that he is mostly over it though as he slept a lot later in the week and had some good naps this weekend. He also often falls asleep for the night around 8-9 but if I try to nurse him on the bed and then sneak away, I usually only get an hour before he is looking for me. He’s sleeping in 2-3 hour stretches generally overnight while cuddled up with me. When he starts to stir, I wake up, nursing him again, and we both fall back asleep.