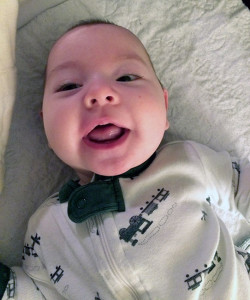 YS is growing so fast! He’s solidly in 3-6 month clothes now. We had a 3 months shots only checkup today (we do an extended shots schedule to make sure they don’t have bad reactions to shots the way I do) and he weighed in at 14lbs 3.5oz, with clothing and a slightly wet diaper.

YS is such a happy and chill baby. He loves to smile and coo, especially on the changing table. He won’t smile for pictures though, much to my chagrin. He also still spits up often, but we’re getting pretty good at learning the signs. He’s so chill that we can put him down for a few minutes in a bouncer, a swing, his sit-up chair, a bed, or on the floor and he’s generally content to just look around for a while and doesn’t usually even make a fuss. 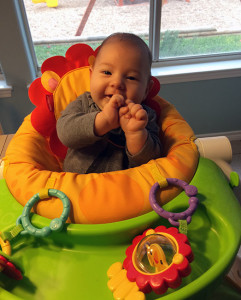 He doesn’t always like riding in the car, but he got a Snuggapuppy for the Holidays (named Hufflepup) and if we turn that on, it helps keep him calm. He is an easy to transfer when he is asleep, which is good. If I can get him into the swing, he’ll often sleep in it for a while, sometimes even up to two hours. 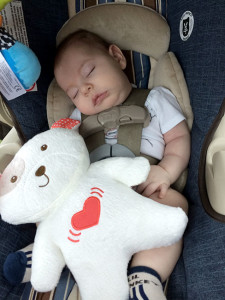 He’s sleeping pretty well overnight. I think I’m getting one four hour stretch at night. He likes to sleep next to me, but he doesn’t always have to sleep on me. However when I try to nurse him to sleep on the second bed and then scoot away from him, I only get about 30-40 minutes before he’s restless and wants to be near me. He doesn’t always nurse to sleep though, especially because we often have to burp him in the middle/after most feedings. But he’ll usually fall asleep with a bit of bouncing or walking. And he’ll almost always pass out if I put him in a carrier. 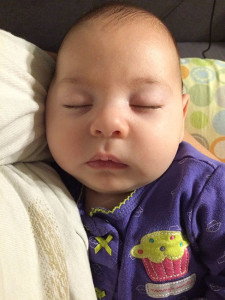 Thanks to my work finally getting a real maternity leave policy and giving everyone who had a baby in 2015 an extra two weeks of PTO, today was my first day back at work. I’m only doing half-days with some days off in between and then some full days but we’re going out of town for the last weekend of the month, so I’ll really be back full-full time in February. On Friday I went to daycare early with YS and we hung out in the Infant A room for a while to get him used to being there with me around. This also gave me a chance to bring in his diapers, wipes, mobile, extra clothing, etc then so I wouldn’t have to remember it all today.

This morning went amazingly well. Little Prince was able to get up and out of bed without disturbing YS at all. In fact, I was able to get LP dressed, his teeth brushed, and started him on his breakfast with YS not waking up (it helps that I nursed YS while LP’s alarm was on snooze to see if YS would stay asleep a bit longer). We actually got out the door about 5 minutes after I’d like to be getting out the door in general, so I consider that a win. LP was excited that YS was going to be in school with him. Once we got there, YS seemed content to look around at everything. 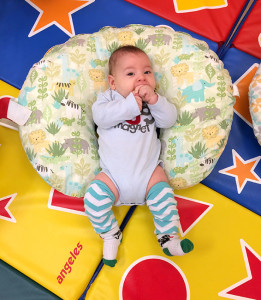 Of course it couldn’t all run smoothly. While I’d remembered to pack everything the boys needed, I forgot my work badge and my pump parts at home. Luckily I could borrow an extra badge and I know how to hand express. It took me 30 minutes, but I got 4 ounces. I don’t ever think I’ve been so proud of 4 ounces before. That was hard work! 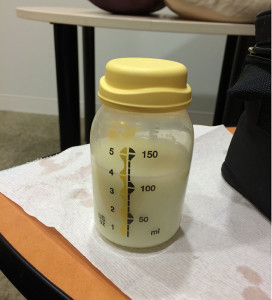 Work mostly involved me saying “hi I’m back” to people and trying to go through my email. I’m down to just over 175, most of which need to be seriously read from over 550 when I finally got my email working this morning (took a little while for my work computer to behave).

After work, I picked up YS. He was just finishing 20 minutes of tummy time. Apparently he took the bottle well (which is good because we’d been working so hard on that!), but is a snacker, taking 1-2 oz at a time, rather frequently. He also napped well in his bed there. He passed out in the car on the way home so quickly. At home I nursed him for a bit and then it was time to go to the doctor’s for his shots. He slept the whole way there, woke up when we weighed him, changed him, and when the nurse gave him his shots, screamed a bit, nursed, burped, and nursed some more, fell asleep, half woke when I put him in the carrier, fell back asleep, and is still sleeping in the carrier near me. I think he’s had a long day :). Let’s just hope he sleeps well tonight.