Today Darius and I went to the birthing center for the 20 week anatomy ultrasound. Everything looks good. Placenta looks good and is posterior (which explains why I’m feeling Bae so much sooner than I ever felt LP). Brain is braining, there are two kidneys, the correct number of arm and leg bones, etc. Bae was crouched down at the bottom of my uterus and not moving around much. Bae’s legs were crossed and so it took some convincing but we finally got the legs uncrossed and were able to see genitals.

Here is LP with the announcement:

That’s right everyone, it’s a boy! 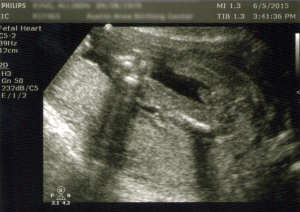 I was pretty sure I caught a glimpse of penis at one point, but I wasn’t sure and the tech didn’t say anything. Since he was so low and curled up she really had to press around to find everything. And with his legs crossed we had to really shake him up. Then she said, “It’s a boy” and I couldn’t really believe it. Then a little later we got the picture above and there’s no denying that one.

With LP’s ultrasound we got some great pictures. With Bae’s, while we saw some good images, we didn’t seem to get copies of them. So here is the one really good image of Bae, possibly sucking his thumb or chewing on his hand. 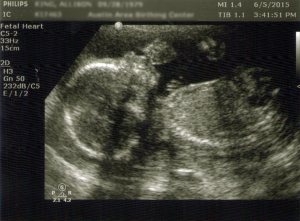 I’ll admit it, I’m going through gender disappointment. I was leaning toward girl with this one. We’re not having one after this, so this was my last chance to birth someone who would be female at birth. I’m mourning the loss that goes with that. I’ve had girl names picked out for so long and now I’ll probably never get the chance to use them. And I really wanted to honor my paternal grandmother with a name. But, as Darius pointed out as we were leaving the birthing center, there’s always male names that can honor her as well. Which is true, but it’s not quite the same.

I’m working through it though. I made acceptance my focus word while I was doing yoga as Darius was putting LP to sleep tonight. I’m working on seeing the positives. And please don’t comment to tell me what they are. I know what they are. I just need to get there on my own. I’m just really glad that we found out early now so I wasn’t disappointed at the birth.

A husband, two sons, and a boycat vs. me and the girlcat. Well, here’s to being totally outnumbered.